July 15th:  We have sold Fiona and her triplet boys Midnight, Starlight and Comet as a starter set to a wonderful family farm in Vernon, VT and they are coming to pick them up this weekend!  They will be living with young children, some chickens, dogs and cats and we are very happy to have found them such a loving home. Thank you Matt!  We have begun milking Fiona (their mom) last week, and she is producing a LOT of creamy, rich milk for us!  We have been getting almost a quart each morning, and once the triplets leave and we are milking her twice/day we should see about 1/2 gallon a day, which is quite substantial for such a small gal! She is doing so well on the milking stand, and since she is seperated now at night from her boys, she runs to the stand in the morning to be relieved and eat her food and nice compost (from our morning juicing of kale, apple and ginger) - which is her favorite thing in the world! We are retaining both of her does Daisy and Savannah (Savvy).
In other news, our garden is thriving with a total of 11 raised beds!  I went to a cedar lumber yard (thank you Koenig Cedar!) and they cut me the sizes I needed, and then I drilled and assembled them in the garden. We have been working with both Red Wagon Plants (thanks Julie!) and VT Edibles (thanks Meghan!) to get organic compost, some great starter plants and seeds and help to teach me invaluable things about organic/biodynamic principles of planting fruits and veggies. The garden is just doing so great!  We have about 75 kale and 80 various varieties of lettuces, a 4x8 bed of strawberries (most of which we will see next summer), mini melons of various varieties, brocolli, red/green cabbages, brussel sprouts, 5 varieties of onions and carrots, collards, mustard greens, swiss chard, 7 varieties of tomatoes, 6 varieties of peppers, celery, bush beans, snap peas, spinach, every herb under the shining sun (planted in the fairy garden/flower bed amongst the fairy villages), a variety of yellow watermelon, acorn squash, butternut squash, artichokes, zucchini, cucumber, currants and gooseberries.  We also added 12 raspberry bushes to the outside of the garden fencing, which should provide fruit this Fall (Caroline and Taylor varieties).  We added a small fruit orchard to the front pasture of our yard with several varieties of apples, pears, plums, cherries, blueberry, juneberry, and elderberry.  We are experimenting with varieties, and then seeing what our favorites are!
Our chickens are doing well, with the exception of Henrietta who got her bum messed up because she was acting like a bossy stinker in the coop one afternoon!  We have had two younger layers start up in the last week: Walnut (our biggest blue cochin) and Layla (a new Wyandotte layer) that have started laying the cute small eggs!  Layla wants to be alone when laying and "asks" everyone to leave...getting louder until they listen, and Henrietta likes to lay in the same nest box...at the same time of course....so they had a little feud where Henrietta got into "her" nest on top of Layla who was already in it and laying.  Henrietta boxed her in and would not let her out. I guess Layla fought back by plucking her feathers out from behind...pretty awful! I think there may be some broodiness with those two as well. Oh well, I guess chickens will be chickens!!! They are crazy little things!!! LOL.

Our five younger chickens are now about 11 weeks old and doing really well!  They are now in the big coop, but protected. So, I was able to set it up so that one of the chicken doors (there are 3) runs out into a seperate pasture just for these smaller gals. When they come into the coop, they run into a wire dog crate that keep them with the big chickens, but protects them at the same time. It was one of my more brilliant moments with this idea! Now everyone is in the same place and it is much easier. It will be another month probably before we move them in with the BIG girls!!!

June 10th:  Our new 5 week old Ameraucana hens...and one Buff Orpington hen! Just picked them up yesterday to add some color to our egg baskets!!! They are so happy to be here, and were sleeping all afternoon in the shade and cool grass! The kids named them accordingly:  Mary (the Buff Orpington), Dottie (the blue/silver), Nellie & Wanda (the two dark copper/black girls), and Lila (copper & blue). They visited the chicken vet today and got a good bill of health!  They have their own little coop and run on the grass.  Violet, one of our blue Cochins, has been limping for awhile and the vet says she is ok too. Whew!

TWIN DOES!!!
Fiona had her sweet twin girls on Thursday, June 6th around 4pm!  They are beautiful, and will be retained by our farm for the future of our breeding program.  The tri-color doe is actually a very interesting pale cafe mocha color (hard to see in this photo) with black and splashes of white all over her body.  I have never seen anything like her!  She is striking!  And the solid white doe has no other color markings on her at all, and resembles a little sweet lamb.  She does have BLUE eyes!  I am pretty sure the tri-color has brown eyes.  They are already lap-sitters and Ginger is an amazing, patient mother!  They will be fully registered with AGS. 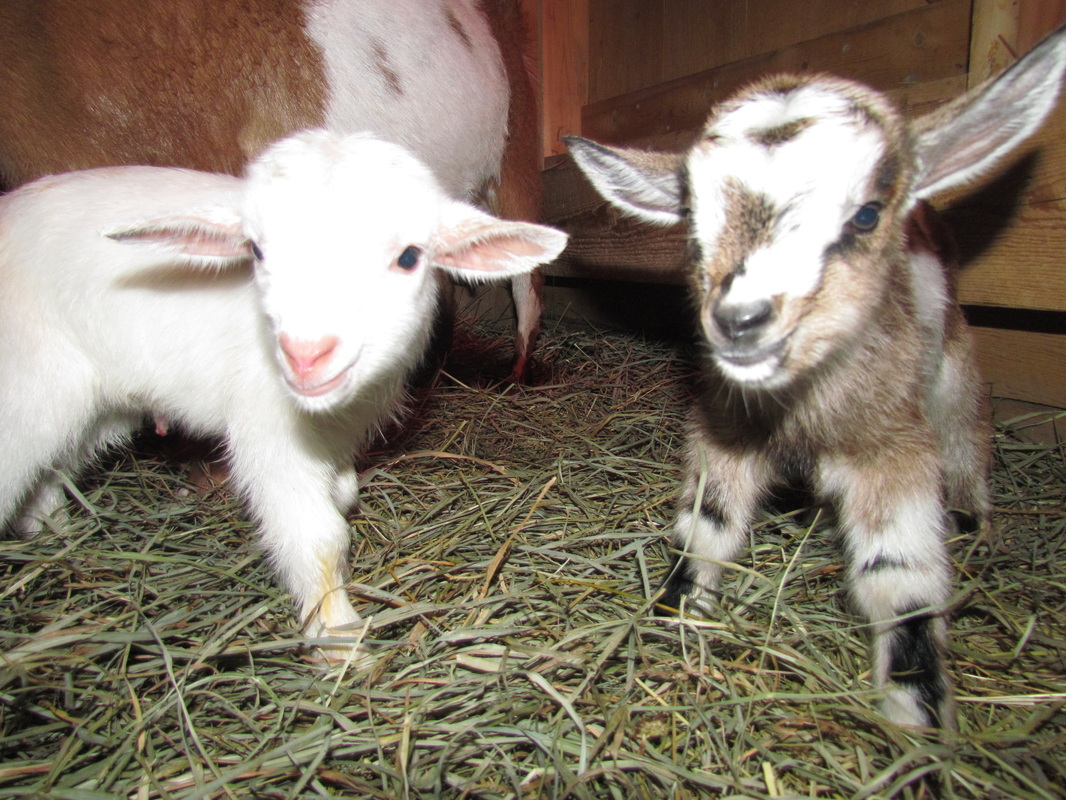 More Farm News!  New Coop and Happy Hens!
This past week, we finally got our big coop - one that will house all of our nine chickens (thanks to Middlebury Fence who modified it and added windows and chicken doors!)!  I myself designed, built, and installed the six internal nesting boxes, and all the roosts myself! Henrietta and Penny (our two barred rocks) are already laying eggs in the new nesting boxes, and our other seven young hens (Cochins and Silver Laced Wyandottes) are settling in, and will hopefully start laying eggs mid-summer!  We plan to add in a few more chickens soon that will complete our hen house. They will be Ameraucanas - a blue egg laying breed, and will add some color to the egg basket!

It is May 15th, and we have had a lot going on lately! Fiona had her beautiful kids, triplet bucks, on last Thursday evening at 8:15pm after a long day of labor. They came out in the order of small, medium, and huge! I assisted with removing sacks and making sure they were breathing, tying off umbilical cords, and then handed them over to mom to do the rest!  They are super sweet, and although they are being dam raised they are getting TONS of attention and have the personalities of bottle-fed babies. Comet, the smallest buck, looks almost identical to his dam Fiona with frosted ears and brown stripe down the back, and is full of energy!  His two brothers, Starlight and Midnight, are solid black with frosted ears, white star markings on the head, white tips.  They are all thriving and dancing around, and Fiona is an excellent mother!